Why Do Red Ink Tattoos Become Itchy And What Is A Red Ink Allergy?

Red ink tattoos have become very popular in recent years. Due to this increase in popularity, there have been increased reports of people obtaining reactions to red pigments being used; discomfort and Itchiness are symptoms that look a lot like an allergic response. While the aesthetics of red pigment cannot be doubted, the knowledge surrounding red ink allergies is still not fully understood. This article will go over what we know about red ink, red ink allergies, and what causes these symptoms. 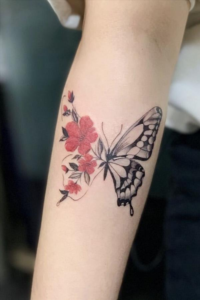 What is in Red Tattoo Inks That Make Them Unsafe?

Red inks used in tattooing are made of many different ingredients. Most often, they are comprised of a dry pigment, a carrier fluid/solution, and a biocidal agent/shelf stabilizer. These ingredients are commonly found on the labeling of the bottle but sometimes don’t include everything that is in them.

While the carrier fluids, stabilizers, and surfactants may cause issues during the healing, the pigment used can make for long-term problems for tattoo clientele. According to a recent report released by the JRC commission in the EU, red tattoo inks are most associated with allergic reactions. Throughout the use of these pigments, red inks have been shown to have impurities that are bad for human health.

The most commonly reported impurities in red tattoo inks are mercury sulfide, iron oxides, Cadmium based additives, lead, and arsenic. Each impurity has the chance to make the healing of a tattoo worse, if not impossible. Some reports by those suffering from a red ink allergy while healing a tattoo include: Why Does This Happen?

To be honest, we don’t have any idea. Science has been creating hypotheses to start answering this question but right now research is in its infancy. In some cases, the reaction a person has is transient (doesn’t last long or only happens once) and cannot be replicated to be a part of a study. In other cases, the person suffering from the reaction may have other health problems which aggravate the problem. Since the resulting allergy is not consistent there is most likely many complex mechanisms responsible for this allergy.

What Else Can Go Wrong with Red Ink Allergies?

While the symptoms above are not a complete list of what can go wrong, you can tell that the reactions are nasty! These symptoms are also only what you can expect if you react to a fresh tattoo. There are also chronic issues surrounding a tattoo when you are allergic to the pigment used. Most of these conditions are so severe the only recourse towards healing is to: Remove the entire section of skin where the tattoo is. This means a doctor excises the skin, removing it and the effective pigment. Then a skin graft is installed to repair the removed section of skin.

If these symptoms are such a threat to the wellness of a tattoo client, why are there not testing protocols in place to determine how safe a pigment is? Well, it is twofold. First, there are no regulations in the US currently to validate the safety of tattoo pigments. The second is that because there is no regulation, scientists are reactionary to issues that arise from tattoo ink allergies. The amounts recorded in each pigment used in tattooing are not constant. The consistency of a pigment is not a thing that a mixer can count on.  Impurities reported on each raw pigment product used change based on how each was produced and by what company made the raw pigments. Due to this variability, tattoo pigments being used on clientele are never consistent enough to create a viable testing protocol or measures to ensure quality pigments are released for use in tattooing.

How do Scientists Test Tattoo Inks for Safety?

Only assumptions about the safety and efficacy of a pigment can be made currently. Why do you ask? Because it is ethically reprehensible to test knowingly carcinogenic compounds on a living human being. Due to this lack of testing, scientists are left with two ways of discovering what happens when a pigment is used on a person. The first is a meta-analysis of self-reported symptoms. Over time, people who get tattoos and have a reaction report the issues to a doctor. Reports are then aggregated into a test to see correlations between a symptom and possible ink/additive. The problem with this type of testing is that most results will be underreported or not reported at all. This is even more common in places like the USA, where the cost of medical treatment dissuades people suffering from non-life-threatening symptoms from going to a doctor for treatment. So, researchers can only make assumptions about how prevalent a problem is based on data given with an incomplete set of data points (reported issues surrounding tattoo pigment allergies).

Another issue with this type of research is that the results always come long after reported health problems. Because there needs to be so many people reporting the issue for science to study the effects, those who suffer from a reaction are not going to benefit from protective research. Those who suffer from a tattoo ink allergy may never get the best treatment available. This is because results of studies may only come available after the disease progresses where treatment isn’t viable.

In Vitro Studies of Tattoo Pigments

The second way of scientific discovery is to use in vitro studies. These types of studies are done by utilizing animal models, cell-on-chip models, or petri dish models (to name a few). These types of studies are what we commonly known as test-tube studies. Much like meta-analysis, in vitro studies lack the exactness of human subjects. In vitro studies focus on a single thing, or very few things, associated with the study at hand. The goal is to create enough data to start comparing ideas (also known as hypotheses) to see if the results work together or have nothing to do with each other. In vitro studies of tattoo pigment safety also suffer from inefficiency. The time necessary to gather enough data to create viable testing protocols or treatment protocols is more significant than necessary to treat those suffering now.

What To Do Before You Suffer from a Red Ink Allergy?

The best thing to do before getting a red ink tattoo or a color you haven’t had before is to get a patch test. We made a video explaining it and have it linked below.

If a patch test isn’t offered in your area, take a chance, and talk to a doctor before getting inked. The effort you put in before getting a tattoo can improve your enjoyment of it once it is completed. For more information about healing a tattoo, you can check out our article: How Much Lotion Should I Use to Heal My New Tattoo?

We also have a YouTube channel that breaks down commonly asked tattoo questions. You can find it by following this link:

As always, we appreciate feedback:

Let us know how we are doing.

Why don’t you buy us a coffee to show us some support!

Or buy some of our merch!

https://publications.jrc.ec.europa.eu/repository/bitstream/JRC99882/jrc99882_wp3_report_on_tattoos_final_amended%20by%20ipo.pdf Tattoo allergy. Can we identify the allergen? – ScienceDirect How to advise a patient who wants a tattoo? – ScienceDirect

Why Are Tattoos Permanent? Why You Should Use Oil-Based Products When Tattooing.

How do You Stretch Different Types Of Skin?

Tattoo Aftercare Instructions- How To Ensure A Good Heal.

How Often Should You Change Your Tattoo Needle?