A Cover-Up Tattoo Has Pigment Already in the Skin.

People wouldn’t request a cover-up tattoo if there weren’t something already embedded in their skin. So, to look closer at the markings made during a tattoo, we need to focus on where tattoos are implanted – the skin. To start, let’s think about how thick skin is.

How Deep In the Skin is a Tattoo? We have a video explaining it for you:

The depth of the existing tattoo plays heavily into the condition of the skin where the cover-up tattoo will be placed. Tattoos that go extremely deep will have a greater chance of healing with scarring, which we discussed briefly in the previous article. Scarring is challenging to maneuver. Not only does it change the topography of the skin, making some spots sit higher than others, but it also changes the skin’s physical construction.

Scarring is a real problem with modern tattoo applications. It is also something that is easily avoided. Awareness of skin construction, repair, and how a tattoo affects the skin is necessary for a positive outcome. Tattoos, when done correctly, are superficial wounds, even if there is a foreign substance being implanted in the body.

Topical wounds (like that in a tattoo) don’t open the body’s internals to the environment. The damage is relegated to the skin, the body’s protective covering. By keeping needle depth accurate and by keeping the trauma necessary to achieve the tattoo to a minimum, heal times decrease, and the chances of scarring are kept to a minimum. This is important to remember as some coverups require multiple sessions to complete, with each session increasing the chances of the skin acquiring the formation of scar tissues.

The Problems with Learning to Do Cover-Up Tattoos

While I know that many clients have gotten a tattoo that they may regret later in life, the majority of cover-up tattoos that I see are done by at-home tattooers or those with little to no cover-up experience. This becomes a problem when a competent artist attempts to do a cover-up without guidance, education, or help from someone well-experienced. It is an industry bottleneck where a select few have obtained the knowledge necessary to complete the procedure correctly and have not disseminated their findings to the industry at large.

When you have a cover-up that has been attempted by an artist who doesn’t know how to approach the process, the chances of scarring increase, this is even more of a problem if the skin shows signs of scarring before beginning. This is where patience is key to success. Taking the time necessary to keep the skin in a condition where it is not having to repair a massive wound is the goal, regardless of the amount of work accomplished. If during the procedure, the skin starts weeping, swelling, bleeding, tearing, or showing other signs of stress, the tattoo procedure should be stopped, and the client should be allowed to heal whatever amount of damage was done.

At the bottom of the article is a handy table with descriptions of surgical wound types and the likelihood of consequences. I found it a helpful tool when comparing tattoo wounds (like cover-ups) and the chances of scarring. We also made a video about utilizing tissue damage to maximize the life of a tattoo:

Moving Pigment in the Skin

Now we move on to how pigment moves in the skin when the tattooed area is damaged. This is a fundamental aspect of tattoo coverups and must be understood before attempting to “fix” a tattoo.

When a tattoo is completed, the body’s immune system, skin scaffolding, and individual cells hold the pigment in place. It’s like soaking a sponge with ink – when you squeeze it, you can remove a large quantity that is being held. So, how do we squeeze the skin to let go of some of the deposited ink?

By tattooing the skin.

What is Tattoo Pigment?

Tattoo pigment is a microscopic compound that reflects or refracts light. These tiny particles are suspended in a liquid that allows them to be transferred into the skin. To a viewer, the colors implanted can look solid, but that is far from reality. When pigment is deposited in the skin, there is space between each particle which can only be seen (in well-saturated tattoos) with a microscope. 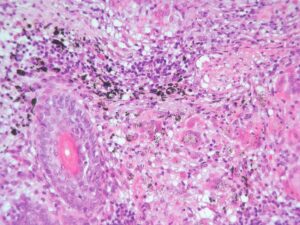 The deposited pigment is held in stasis and can be broken free of its bonds by inducing stresses that force the body to repair itself. Using the same process an artist would use to create a new tattoo, the use of needles striking the skin at a precise depth forces the body to remodel. When it does, the ink that has been held fast is disrupted and can then migrate further into the body for absorption (which gets trapped in the lymph tissues) or becomes expelled during the healing process.

We made a video discussion of scar rejuvenation that parallels this idea. Here it is:

How Do We Know Pigment Can Move During A Tattoo With No Ink?

This may seem a bit extreme, but we have tested this. Using a simple setup (coil machine, 7 round liner, disposable tube) with no pigment, tattooed skin was covered in a standard, color-packing fashion. As the skin took a regular route towards repair, the damaged skin cells, sloughed off during the healing process, contained pigment. Since no pigments were used during the procedure, we could only assume the underlying pigment was disrupted enough to undergo transit during the repair process.

In a shop setting, any artist can test this theory on their skin. We recommend such actions before attempting a cover-up.

Now that we have covered the planning and basic theory behind tattoo coverups, we will move on to the following article that explains how to accomplish a successful tattoo.